Lucy was 6-years-old and attended a mainstream school. She needed to give evidence in court about alleged sexual abuse, having disclosed details some months before in a camera recorded interview. The recorded interview was in place of the written statement that an adult with no difficulties would have provided. Although, at first, Lucy appeared to be functioning as a typical child of her age, in her police interview, Lucy had not understood some adult vocabulary, sentence structures and certain question types such as ‘Why did you not tell your mother before?’. 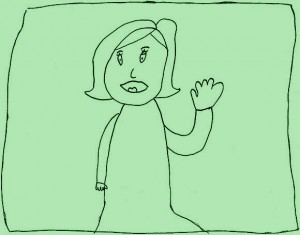 At the request of the Crown Prosecution Service, an RI visited Lucy at home and assessed her communication skills in depth. This assessment was carried out in the presence of a police officer, and was then written in a findings report. The RI recommended how Lucy could best be cross-examined within the constraints of her language skills. She also proposed the use of some simple visual aids in court to support Lucy’s narrative. These visual aids, which were also used at the assessment, included a small wooden doll, line drawings of furniture and some simple pictures which Lucy herself had drawn. All of these had helped Lucy to ‘anchor’ her thoughts to the places and events she described.

The RI met with the judge and barristers in advance of the trial at a Ground Rules Hearing to explain her recommendations and proposed the use of visual aids. She then sat alongside Lucy during cross-examination via a live TV link. If the barrister’s questions were too complex, the RI had the power to advise on the use of simpler phrases. At times, alternative words were suggested and, in this way, the process of two-way communication ran more smoothly. Lucy used the visual aids when needed; and found it helpful to point to the pictures she had drawn. One picture represented her ‘request’ for questions to be asked more slowly so that she had more time to think.