Eleven-year-old Vicky’s autism spectrum difficulties made it hard for her to fit in with other children: she was always on the outside of groups. She found it easier talking with grown ups. One thing she felt good at was drawing. At home and in every school break, she’d draw different breeds of dogs.

On the way to the corner shop, she often met a friendly man who always looked at her pictures or gave her a sweet. It was great being the centre of attention. When he invited her to see his own pictures, she remembered about not going with strangers – but this man wasn’t a stranger any more. She got in his car: he said it wasn’t far.

Vicky found the house very messy but his photos of animals and birds were brilliant. He offered her a drink then took her into a second room where the curtains were closed. When Vicky asked to go home, the man’s tone changed completely. She was told to drink up and undress.

Found wandering in the streets far from home, dazed and frightened and without her coat, Vicky had extreme difficulty explaining to the police what had happened. She found their questions very hard to follow.

An RI was called in to assess her communication difficulties and advise the police before they interviewed her on video. Talk of a police video made Vicky panic that they wanted to film her like the man had done. The police interviewer and RI worked together to reassure her, and slowly but surely she was enabled to give details of the man, the car, the dark room and what happened in it. 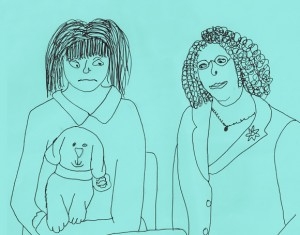 The man was identified and charged with the trial date being set for ten months later. In the meantime, the RI had written a report. She met the judge and lawyers to explain aspects of Vicky’s many communication difficulties. It was agreed that she could sketch details if that helped; and this she did on two occasions during her cross-examination. The RI sat beside her in a Live Link room, helping both the Defence lawyer and Vicky when difficulties arose with understanding questions or answers.

The trial was long; and Vicky learnt later that other children had gone to see photos at the messy house. The judge and jury at court had listened to what she said and were grateful for her help. Vicky drew the picture on the right for the RI to say thank you and the police passed it on.